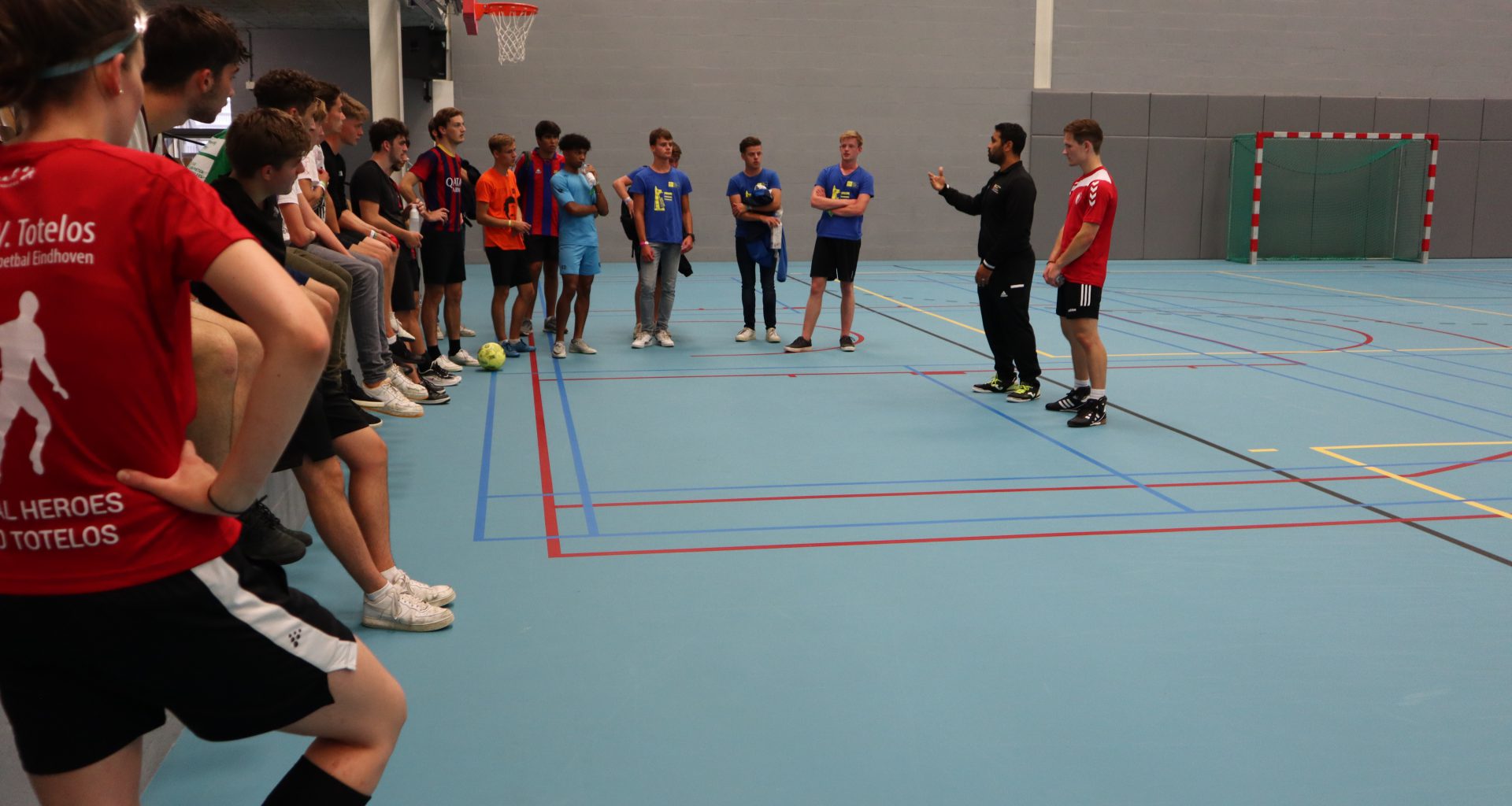 The trainings of E.S.Z.V.V Totelos are taking taking place in the Student Sport Centre Eindhoven and are given by our trainers Atef el Allouche, Raymond Starke Melissa Grunewald en Joey van Hoof.

The training on Monday evening is an open training, everyone who possesses a sports card is free to participate without cost. On Tuesday and Thursday there are trainings for trainingmembers. On Tuesday it’s a mixed training and Thursday men and women train seperately. If you are interested in training on Tuesdays and Thursdays, it is possible to become trainings member for €20,- per college year. As match member you are automatically allowed to take part in any trainings.

The selection trains on Mondays and Wednesdays. These trainings are only for members on special invite by trainers of boardmembers.

The tactical training is only accessible for teams playing in the KNVB and NZVB. The requirement for the training is also that a minimum of 4 players of your team are able to sign up for this training. Application fort he tactical training is arranged via Boardmembers Sim(06-37462513) en Jesper (06-83614126). Signing up fort his training is mandatory, if the maximum amount of players has been reached you will get priority fort he next training, provided you can still bring enough players. For the schedule (and availability) click here.

Atef is our trainer of the Thursday technique/tactics training and also of our men’s selection teams. With our recreational players he knows how to train hangover resistant, but listen to his tactical instructions! This energetic coach knows how to find a point for improvement with every world goal and partly thanks to his tireless efforts, our selection teams are very formidable opponents. Partly thanks to Atef, Heren 1 became champion in the big league in the 2016/2017 season and was promoted to the Top class!

Raymond is the former coach of our women’s teams and also ex-coach of Dames 1. Under Raymond, our ladies have already achieved considerable success, such as the title of the big league in 2016/2017 and since the 2013/2014 season, the Totelos ladies are title holders of the regional cup. In 2016/2017, Dames 1 even made it to the semi-finals of the national cup, a historic achievement for Totelos. Raymond can rightly be called a success coach! Raymond still gives training to the men every Thursday.

Melissa previously played at Dames 1 and has delivered a lot of performances. They have become champion in the big league three times in a row and would even almost play Eredivisie. In the 2013/2014 season Melissa also committed herself to the association in a different way by doing governance. After all these years of playing football, she has decided to take on the role of trainer. From the 2019/2020 season, Melissa will give the training to the ladies every Thursday evening.

Joey has been active as an indoor football player since he was 12 years old. After having played at Totelos for 3 seasons, Joey made the step in 2019 to Eerstedivisionist BE’79, who now play in the Eredivisie of futsal. From the 2020/2021 season, Joey will give training at Totelos. He gives the open training on Mondays and the mixed training on Tuesdays. In addition to the training sessions at Totelos, Joey also works as a physical trainer in the youth academy of FC Eindhoven.